After Aidan had been napping for a while today I started hearing some babbling on the monitor. I went in to check to see if he wanted to get up, and I found him at the other end of the crib, talking to Monkey!! Monkey, Octopus, and Sheep get to sleep in Aidan's crib, but at the other end from where he sleeps. So, it was hilarious today to find he'd crawled over the blanket and around Octopus and sat himself in the corner to play with Monkey. 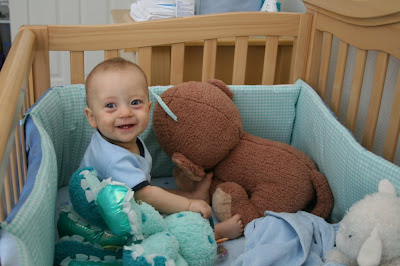 Trick #1: Getting to a sitting position on his own after crawling 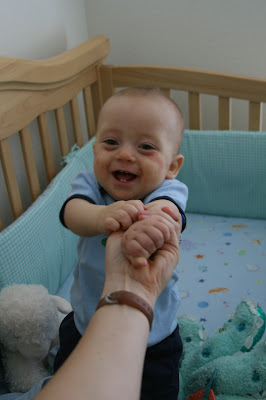 Trick #2: Pulling himself up to stand just holding onto my arm 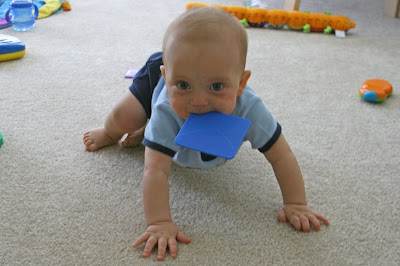 Trick #3: Carrying things around in his mouth while he crawls. He loves holding onto his blue letter - it's like he's delivering the mail to us :-)

His face has some red marks on it, like some kind of allergic reaction. We put some cream on it that we got from the doctor before, and we're trying to figure out if it was food related. Hopefully we can eliminate whatever caused it.
Posted by Jenna at 4:33 PM

He is too cute! He's like a mini Postman Pat with his letter! And I love that he loves Monkey!