Even though we've been blogging a lot lately, I wanted to take some time to write an update for Aidan turning 18 months. It seems like we just celebrated his first birthday, and he's already half way to his second! 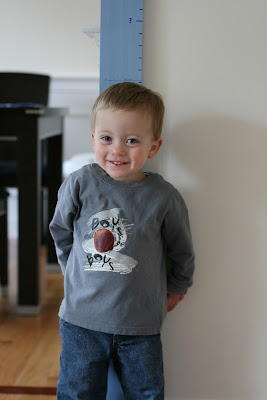 AJ at 2'7", posing with his new measuring stick.

So, at 18 months, Aidan:
- LOVES all kinds of balls: Baseballs, basketballs, tennis balls, soccer balls, footballs, bouncy balls... He plays so much catch and spends ages shooting balls into his hoop. He always surprises people with his arm! He often walks around saying "where's the ball?". Then he'll point and say "there's the ball!"
- Builds Legos well and puts together wooden train tracks
- Loves playing on his slide and checking out new slides at playgrounds
- Rides in his cozy coupe and on his new trike
- Gives great hugs and kisses
- Loves to help me do things like unload the dishwasher, sort laundry, close doors, and of course play with shovels/rakes. He's great at listening to directions and knows where things go.
- Has 16 teeth!!
- Just got his second haircut
- Loves playing Hide-and-seek and reading books
- Sleeps from 8 to 7, and naps for an hour or two after lunch

He's doing great with his sign language, and it's really helped prevent him from being frustrated when he wants something. He signs "All Done", "More", "Food", "Drink" (sort of) and "Diaper", plus he has a cute "where is it" shrug with his hands out.

I didn't leave it off - he actually doesn't say no! He has a great head shake though :-)

AJ is still a little peanut! We measured him with his new measuring stick to be 2'7", and he only weighs 21.5 pounds.

It's been an amazing 18 months, and we're so excited for him to be a big brother soon! Hopefully baby 2 is as fun and happy and Aidan :-)

[4/13/10 Update]: I realized I forgot to post the preggo picture we took over the weekend. Here's the baby at 7 months in utero! 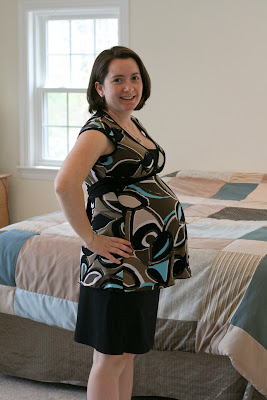 What a wonderful little boy he is. I hope the 2nd baby is just as sweet tempered and nice!