Aidan's new bike arrived today, and he loves it! 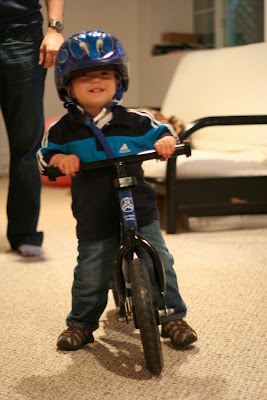 We've been talking about getting this type of bike since before we even had him - I saw them years ago and thought it was such a great idea. Basically, it's a really small bike with no pedals that kids learn to balance on. They push off and glide, and can actually get going really fast. It's supposed to be a really easy transition to real bikes, without ever using training wheels. After seeing how much Aidan likes "riding" his trike (he can't actually reach the pedals), we figured it was time to get one of these. There are a few out there - Like-a-Bike, Strider PreBike, and Balance Bike. Aidan got the Strider since it has the lowest seat and he's such a peanut! 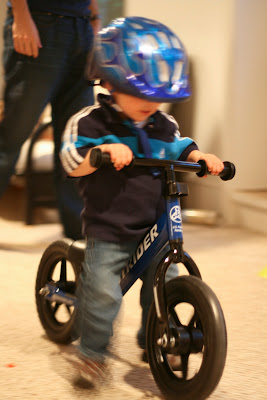 As soon as Aidan saw it he said "it's a bike!" He instantly went looking for his helmet so he could get on and ride it. We took it to the basement and he played with it the entire night, from after dinner to bed time. He was not happy to have to put it away and go upstairs to bed! 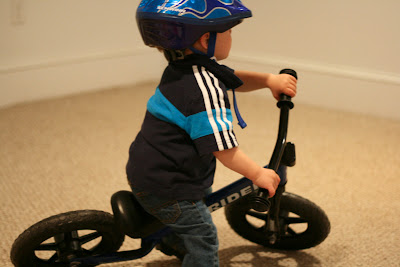 He did great for his first time on it - he didn't glide yet but he was turning really well. 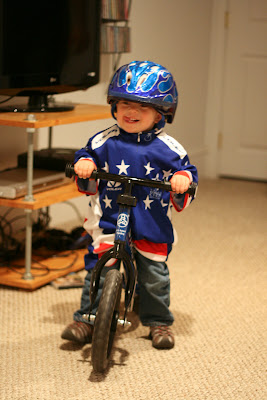 Isaac let him wear my Stars'n'Stripes jersey too.

We took some video and I'm sure we'll be taking lots more video and photos as he uses it more. It'll be fun to glide down the driveway!
Posted by Jenna at 9:23 PM

You've GOT to video his first time coming down the driveway...

That is so cute!!!! He'll beat his Uncle James at riding a 2 wheeler at this rate!

Awesome. Without pedals, he'll have better cornering clearance in crits.