How To Paint a Basketball Court (at someone else's house!)

Jenna came up with the idea that for Abram & Leigh's anniversary we should clandestinely paint a basketball court on their driveway. It's something they always talk about doing, but it just takes time -- something they don't have between flying, cycling, kid taxiing, overly-aggressive adult soccer leagues, etc.

I was totally game. The best kind of home-improvement project -- when you're learning on the job -- is at someone else's house!

The weekend of their anniversary, Abram & Leigh were off in upstate New York, but unfortunately, it rained all weekend. Luckily the following weekend they were once again in New York (at a wedding), and the weather was perfect.

Finding all the online basketball-court templates wanting, we decided to just do it ourselves with the power of geometry and duct tape. Here's how you do it: 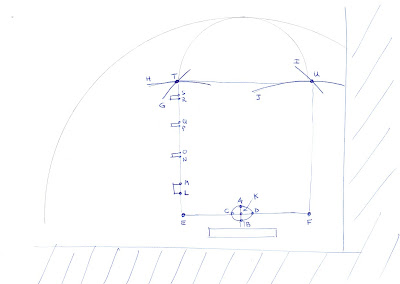 We were originally hoping the A&L Dancy kids would be around to help entertain the little ones. Fortunately, Aidan had fun with the lawn mower and Sierra could be corralled for minutes at a time. 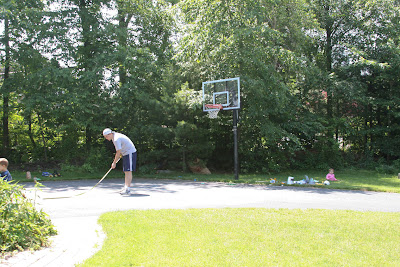 All our measurements were to the inside of the line, then we used masking tape of the correct width (2") to create a placeholder for the line. Then we used duct tape to mark the outside of the line. I was sore for 4 days from all this bending over -- that's what she said! Topic for discussion: when did I get so old? 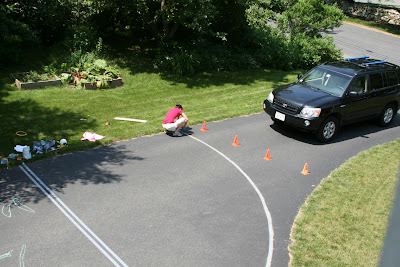 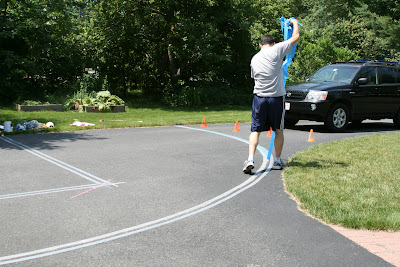 We couldn't NOT do the semi-circle at the top of the lane. This tight circle was a little too much for the duct tape, as it kept folding and occasionally not bending well enough. I used a knife to create the intersection between the two arcs. 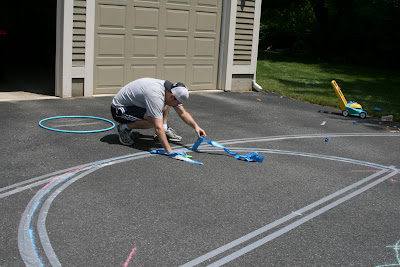 We originally intended to paint with rollers, but it bled. Instead we used my paint sprayer. For paint we're using latex zone-marking paint. 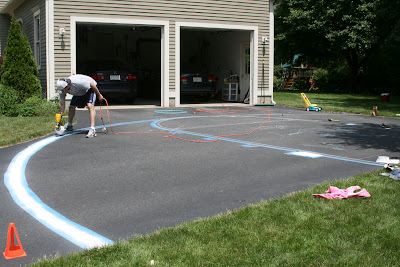 Even though it looked like we had enough buffer around the lines, there was a clear halo of paint from the sprayer. We tried scrubbing it off, but our kids woke up from their naps. We'll correct this in v2.0. 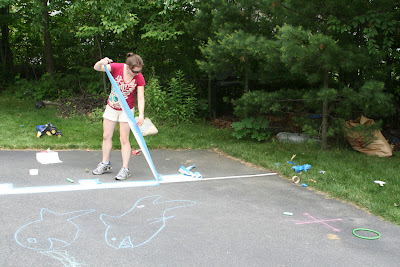 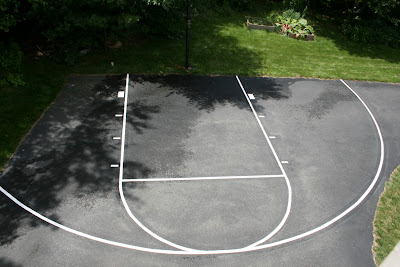 How come they are only now doing this??? How many years have they been in that house??? :-)

BTW, I hope they were pleased with their "gift"!

This is a comment from blog.thedancys.com. If it works, Isaac, feel free to delete.

"they" are only now doing this??? They didn't! We had to! :) Before the kids got any older! But we knew they wouldn't mind permanent paint on the driveway since they did want to do it. Now they just can't reseal the driveway...

I just read this. Yes we love our gift and the girls do too! I love this post, I may need to steal it for my blog book. I'm glad you did it. I think we'd still be talking about it for years to come.

Want to know how much Harga Pengecatan Lapangan ?