Isaac in the Media

With the glamourous Laramie Boomerang under my belt that makes three newspapers in the last 13 months. The others:
Aspen Daily News
Boulder Daily Camera

My Dead Dog race report can be found here.
Posted by Isaac at 10:58 PM No comments:

I took my 5 month photo today, so I decided to put them all together
into one photo to compare. I didn't think about taking photos until 3
months, but I found a photo from January from right about when I got
pregnant, so that's my 0 months/"before" picture. As you can see, it's
getting scary big already, and I've still got 4 months to go!
Posted by Jenna at 10:06 PM 1 comment:

My brother is about half way done his tour in Afghanistan, and we've actually been seeing him in the news online a lot recently! The Marines were fighting the local Taliban in the Garmsir district for about a month - James is part of a Mortar team in the First Battalion of the Sixth Marine Regiment. Now that they've succeeded in capturing the area, they set up a system to repay the villagers for damages to their houses, animals, and crops. The Afghani people come in and petition for compensation, James adds up all the damages, Marines go out and verify it, and then they're given vouchers.

"There's one flaw in the Marines' campaign. While they freely issue compensation vouchers, they don't have any actual money to give out yet. The cash, the Marines tell the villagers, will be here on July 1. The date has already slipped once, from mid-June, and some people doubt they'll ever see the money. 'If we don't pay them on the first,' Sgt. Blake said, 'it's going to be bad.' "

This article from the Wall Street Journal on June 18 talks about James, the No. 2 man:
After Battle in Afghanistan Villages, Marines Open Complaint Shop

Today there was more news from NPR, including a lot of James in the video! It's the one on the top left, at about 1:20:
Marines Try to Improve Image in Taliban Stronghold

Looks like they're in camping chairs in the background, ready for something fun.

James is right in the middle here, with the full vest and sunglasses.

I guess that's what a Mortar shell looks like!

A couple of weeks ago Isaac's aunt Cathy sent us the first items from our Baby Registry. I'd only just registered and hadn't told anyone about it yet, so it was a great surprise to get a blanket and hooded towel set to match the nursery bedding. We chose the Sea Life set since it's pretty neutral and matches my Ollie the Octopus. Glad you enjoy the blog, Cathy! 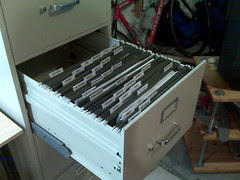 If you have OCD like Jenna, then this is where you get your kicks!

I know I'm a little young to be considering retirement, but hey, if Jim Brown can retire in the prime of his career, why can't I retire my fandom at the absolute pinnacle?  6 championships since February 2002, one for every major Boston sports team!
Posted by Isaac at 10:35 AM 1 comment: 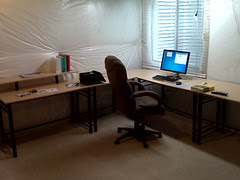 Over the weekend Colin helped me set up a home office in the basement!

The carpet discarded from the Pergo install came in handy, and we bought a couple desks from Staples and made a mega desk out of the pair.

Now I just have to figure out what to do with all the crap that is conveniently out of frame (in the picture).

Today Ernie W - Longmont Arborist and BSV member - took my mom and me on a tree tour of Longmont. My mom was so excited to learn so many new trees!!!
Posted by Jenna at 1:32 AM 2 comments:

What Happens When You Turn On Your GPS On An Airplane 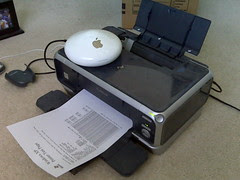 The Airport Extreme may have won some battles today, but getting it to behave with my Linksys router (as a WiFi extender) and printing over the home network is sweet sweet victory.

Backstory: while cleaning out the basement today I discovered the Airport which has been out of commission for 3 years at least.

Now the printer needs not migrate to the basement with the computer.

Lot of movement from the little one: kicking feet, opening mouth, resting its head on Jenna's aorta and bobbing its head to the beat.

We couldn't coax the baby into a position to get a full ventricle view of the heart or the face, so there'll be another limited sonogram in 4 more weeks.
Posted by Isaac at 2:01 PM 2 comments: 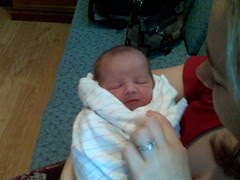 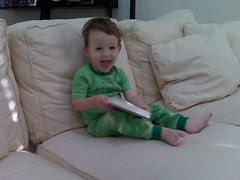 ... Due to the imminent arrival of Nola.

BTW, did this kid eat a whole can of refried beans last night?

Derrick digging the pink.
Posted by Isaac at 3:43 PM No comments:

We saw Jerry Seinfeld live last night at the Temple Hoyne Buell Theatre in Denver!
Posted by Jenna at 3:46 PM No comments:

Working for the (Wo)Man

Check out this wrap job by Dave Kilmoyer!  How sad is it that I knew instantly that it was an Excel catalog?
Posted by Isaac at 9:25 AM No comments:

We got new BlackBerries yesterday, so here's a photo from the phone this morning - we stopped off for breakfast on the way to work.

Haven't quite figured out how to blog directly from the phone, but it's awesome being able to send email and browse the web. I'm sure Isaac will figure that out today.