We finally spent a weekend just at home, although of course still super busy trying to unpack and set things up. But, we did get to have a lot of fun too. On Saturday Aidan and I went to Rachel's soccer game while Isaac and Abram went out for a ride, then when we got back it was my turn to go ride with Leigh. Isaac and I seriously need to get back into shape! 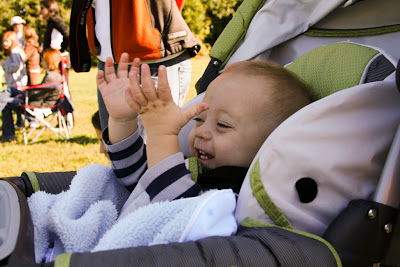 Aidan loved clapping for Rachel's team when everyone else did! 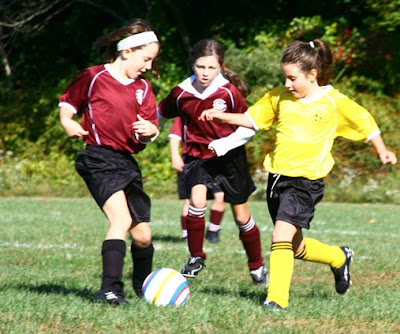 Rachel scored a goal! Her team won too.

We started our family dinner swap on Friday, but then with all the other stuff going on we had another impromptu dinner over here on Saturday too, and Steve and Leah also came to visit! 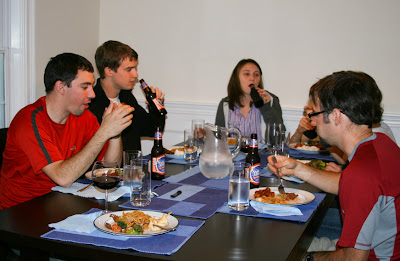 We had a lot of giggles all weekend from AJ, especially when running around and popping out to surprise him. 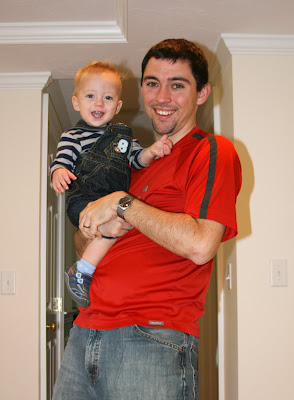 Today Aidan passed out for over 2 hours in the stroller while we went shopping, then had more smiles while we played in his room. 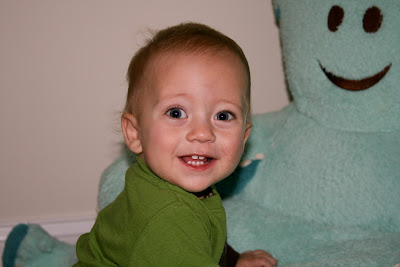 Isaac got 4 sets of shades installed today, and we finally put up towel racks and a mirror. We also picked up Aidan's new Pottery Barn play table!! More pictures to come as we set up the house.
Posted by Jenna at 10:42 PM 1 comment:

Isaac, Aidan, and I flew to California this weekend to attend Dave and Jimena's wedding and to visit my parents. It was a short trip, but we packed in a ton and had a blast.

I think AJ's favorite activity was playing with the Star Wars Lightsaber on the iPhone. He loved swinging it all around, hearing the cool sound it made, and it was so cute watching him. 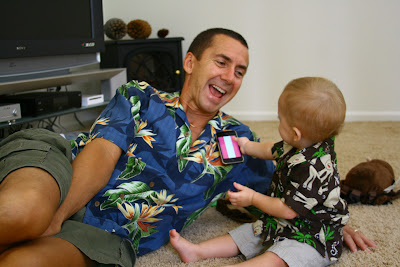 Getting Ol' Pa with the phone - wearing a matching shirt but with monkeys and elephants! 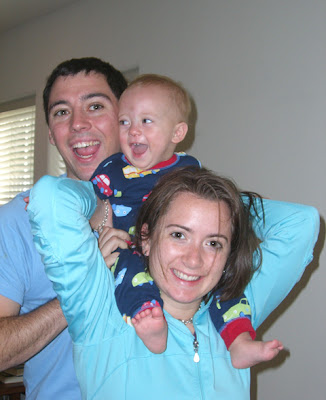 Aidan giggles hysterically while we run around with him on my shoulders! 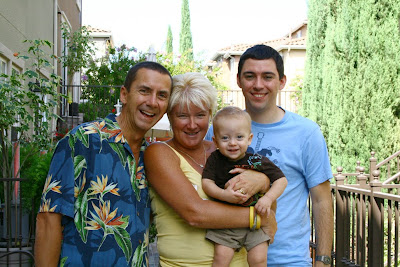 On Saturday Ol' Pa and GB watched Aidan while we went to the wedding. They had a great time at the park going on the swing and the slides, and we had a fun night out. The wedding was at a beautiful vineyard so we enjoyed having nice red wine all night! 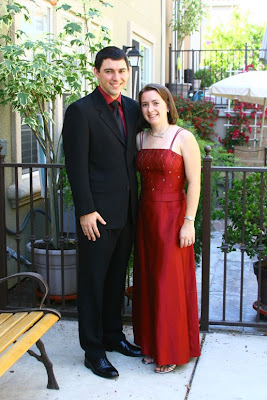 Ready for the wedding.

Aidan had been perfect on the flight out there, but the way back was another story. It was funny being on the other side of the crying baby on an airplane - and it's definitely worse! I felt so bad that he was unhappy and making noise and we couldn't figure out a way to make it better. But, eventually he passed out and slept in my arms the rest of the way to Boston and then right on through to 6:30 this morning. I guess he was just overtired from all the excitement but not letting himself nap in his car seat. 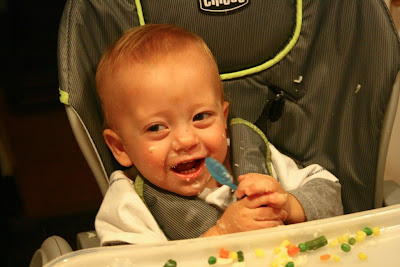 Tonight we had chicken and mashed potatoes and he actually used the spoon to feed himself potatoes!

Aidan and I went out exploring around the house the other day, so I got a few new photos of the little cutie. 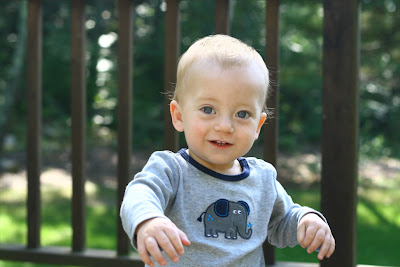 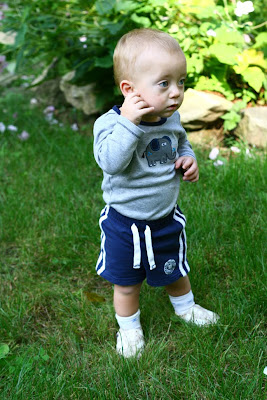 He looks so little here! 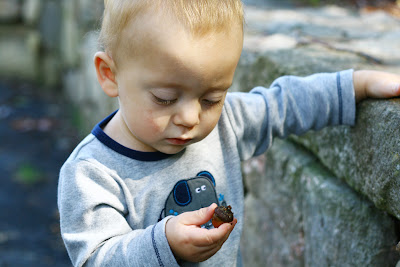 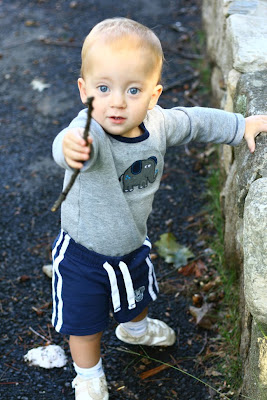 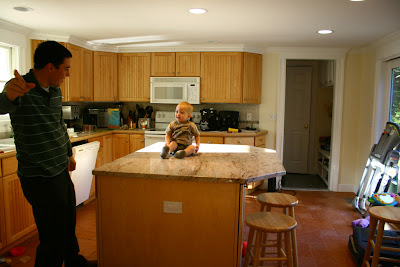 And today, he tried out the granite counter we got installed last night. I think he approved! I absolutely love it, it brings in all the colors of the kitchen - the floor, the other counters, and the cabinets.
Posted by Jenna at 11:36 PM 1 comment:

It's already time for Aidan's last monthly update since he'll be a year old next month, I can't believe it! At 11 months, Aidan:

- Walks! Easily takes a few steps between things, and often takes 15-20 steps in a row
- Discovered stairs and loves climbing them
- Actually moves his hand up and down when he waves
- Eats lots of real food, including meat
- Signs "All Done" when he wants to be finished with his meal
- Loves making noises on the back of his hand
- Says "Ma..Ma..Ma..Ma.." but I can't quite discern an actual on purpose "Mama" in there
- Still giggles a lot and loves when we run around and jump out and play Peak-a-boo
- Loves turning on faucets and putting his hands in the running water
- Normally sleeps from 9 to 6 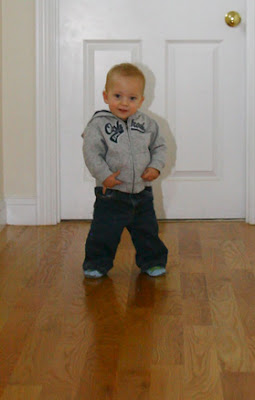 Standing up like such a big boy! But, he's wearing the 6-9month hoodie James and Britt got him last Christmas! So, not really such a big boy... 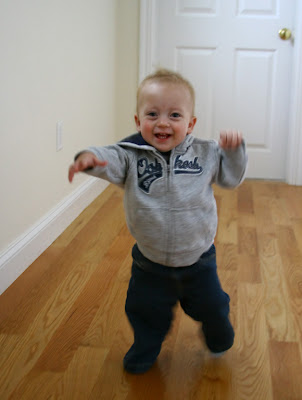 So proud of his walking to mommy. 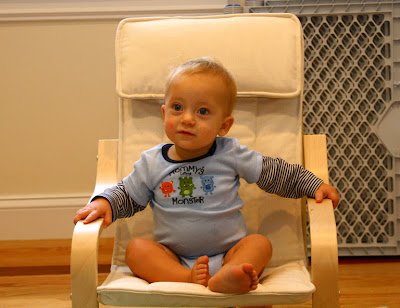 Sitting in his new IKEA chair that matches his daddy's.

I haven't been this much behind on sleep in ages - with trying to do lots of unpacking after Aidan goes to bed on weeknights, we've been staying up way too late. Here I am trying to get his blog done while it's still September 12, then I'm hitting the sack. Sorry for the lack of exciting, fancy photos, in my sleep deprivation I didn't turn the ISO back down, so they're pretty noisy.
Posted by Jenna at 10:41 PM 2 comments: 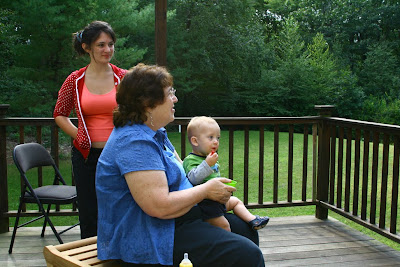 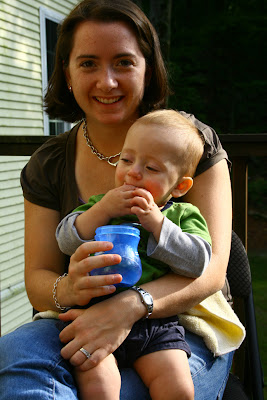 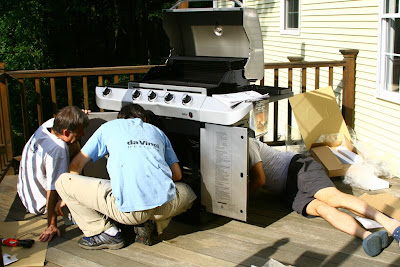 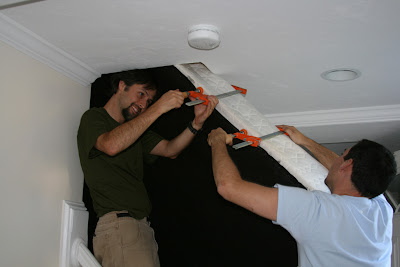 In other news - we have a new niece! Carolina Marie Blake was born on September 4th, and everyone is doing well. She looks just like her big sister and already has more hair than Aidan!
Posted by Jenna at 9:46 PM 1 comment:

We closed on the house today! It was such a relief and of course we're so excited to move in and get settled in Boylston. It's so classic New England - we're living in a Cape style house in a town of 4,000 residents. 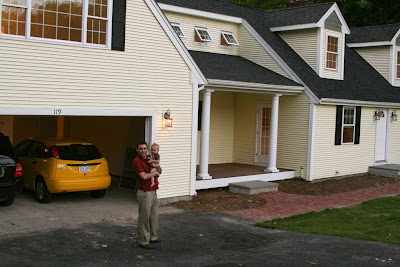 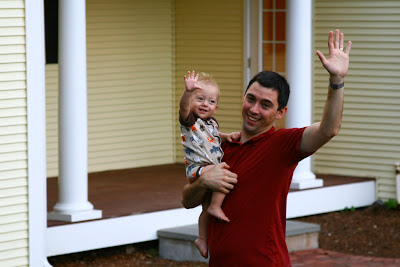 We celebrated our first night at the house with Bertucci's and wine with the Dancy Clan. We didn't have enough time to take anything over there so we're back at the apartment for the night, but we'll start the move tomorrow. 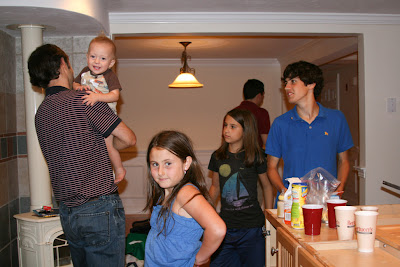 Luckily, we've got the long weekend to move in, starting with getting our PODS delivered tomorrow. It's going to be a busy weekend!
Posted by Jenna at 10:10 PM 2 comments: